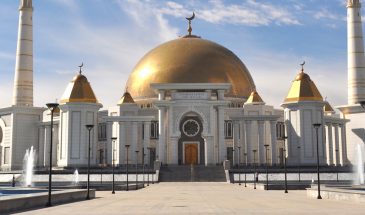 Journey into Central Asia’s heartland and uncover the rich legacy of the Silk Road, the ancient trade routes linking China to the West.In Turkmenistan, discover the white-marbled capital of Ashgabat. Meet with nomadic families, wander spice-filled bazaars, witness legendary Turkmen horses, and experience cultural splendors on an epic journey through one of the most ancient and mysterious corners of the globe. In Uzbekistan, travel to Tashkent to relive the romance of traders laden with precious silks and spices and explore the medieval streets, tiled madrassas, and lavish palaces of Bukhara and Samarkand.

Arrive in Ashgabat, the capital of Turkmenistan. Your driver will transfer to your hotel. Overnight in Ashgabat.

Spend the day exploring Ashgabat. Highlights of today’s tour include the National Museum of History and Ethnography, the Arch of Neutrality, and a visit to ancient a Nisa - a UNESCO World Heritage Site. This huge mud-brick city, still enclosed within an imposing wall, was one of the earliest and most important cities of the Parthian Empire, a major power that dominated this region from the 3rd century BCE to the 3rd century CE. Gather this evening with fellow travelers for a welcome dinner to celebrate the beginning of the journey. Overnight in Ashgabat.

An early morning flight takes us to the city of Mary, from where we drive to Merv, a UNESCO World Heritage Site. Across the vast flat landscape stretch the remains of an array of towns whose city walls enclose nearly 2,500 acres. There have been many incarnations of Merv.  Archaeological surveys have shown that a village existed here as far back as the 3rd millennium BCE. The Ancient Persians developed the city in the 6th century BCE and, under Alexander the Great, it was renamed Alexandria. This was the Silk Road’s main trading route between Bukhara in the 12th century, before the Mongol invasion, was reputed to be the world’s largest city. After exploring the extensive remains, walk through the museum that exhibits archaeological finds from sites excavated in the Mary oasis, including material from the Bronze Age sites of Gonur Depe and Togoluk, along with ancient Merv.  Return to Mary for the evening flight back to Ashgabat. Overnight in Ashgabat.

Fly to Dashoguz and drive to the UNESCO World Heritage Site of Konye Urgench , once the capital of the Khorezm region and part of the Achaemenid Empire. A major trade center on the Silk Road from the 10th – 14th centuries, the old town contains a fascinating series of monuments including a mosque, the still standing gates of a caravanserai (an ‘inn’ for caravans), fortresses and fortification walls, several graceful mausoleums, and a brick minaret with delicate geometric designs towering almost 200 feet into the sky. After exploring this magnificent city, border formalities, then, into Uzbekistan and on to Khiva.  Overnight in Khiva.

Khorezm is a large region where oases once dotted the Kyzyl Kum (red) and Kara Kum (black) Deserts with the Aral Sea on the northern edge. Spreading across today’s borders of Uzbekistan and Turkmenistan, the area has been occupied since the Bronze Age and is dotted with ancient remains of settlements, some more than 5,000 years old. Fed by the fabled Oxus River, these fortified towns thrived on lush agriculture and were important stops for traders and caravans that crisscrossed this land for thousands of years.  Today’s all day excursion takes us to three captivating Silk Road centers. Dating back to the 1st millennium, the impressive ruins of the fortified capital of Toprak Kala covers more than 42 acres and is encircled by mighty adobe brick fortifications topped by protective towers. It also contained a Fire Temple with a sanctuary. Towering over the city is the 2nd century palace-bhold of the local Khorezm rulers, once containing more than one hundred rooms. It is one of the most remarkable architectural constructions of Oriental antiquity.  Nearby Kyzyl Kala, or Red Fortress, was a defensive bhold in the line of battlements created to protect the north-eastern borders of Khorezm.  Lunch today will be in a yurt camp next to Ayaz Kala, a site consisting of three fortresses built between the 4th century BC and 7th century AD. Return to Khiva in the late afternoon. Overnight in Khiva.

Spend today exploring the old walled city of Khiva, once the capital of the kingdom of Khorezm and the last resting-place for caravans before crossing the desert towards Iran. Founded about 900 AD, it was conquered by Mongols in the early 13th century, invaded by Turks in the 1400s, and became part of Russia in the 1800s.  Khiva’s outer city, Dishan Kala, was once protected by earthworks with eleven gates, and Ichan Kala, the inner section, still retains its enormous enclosure wall.  With wealth derived from the Silk Road trade and now a remarkable open-air museum of history and architecture, Khiva was the first site in Uzbekistan to be placed on the UNESCO World Heritage List. The historic district contains over fifty monuments as well as many traditional houses. Djuma Mosque, originally built in the 10th century was rebuilt later using over one hundred exquisitely-carved wooden columns. Sheikh Mukhtar-Vali Complex, a mausoleum built in the 16th century, is famous for its beautiful incised wooden doors. Kunya Ark was the bhold-palace where the Khans lived from the 17th -19th centuries and housed the harem. The magnificent 19th century Tash-Hauli Palace was constructed around three courtyards with walls covered with striking azure tiles and brightly painted ceilings. Spend the day exploring this fascinating town and in the evening fly from Khiva to Bukhara. Overnight in Bukhara.

Located on the Silk Road and more than 2,000 years old, fabled Bukhara has long been a focal point of trade, learning, culture, and religion. The most complete example of a medieval city in Central Asia, this breathtakingly beautiful city is like a whimsy from the Tales of Arabian Nights. We spend two full days exploring this UNESCO World Heritage site and will seldom be out of sight of ever more stunning monuments.The Old Town in Bukhara has a unified feel, drawn together by a central reflecting pool and plaza, by commonality in the structure of the domed bazaars and by the major monuments ringing the Old Town, the Kalon Assembly, the Zindan Prison, and the Ark Citadel. This morning, sightseeing begins at the Ismail Samani Mausoleum. The 10th century resting place of Ismail Samani, founder of the Persian Samanid Dynasty, is detailed with sixteen different styles of brickwork. The Chashma Ayub Mausoleum, visited next, is not a true mausoleum, but a kadamdjoy, or site visited by a holy person. Visit the nearby Kukeldash Madrassah, the largest of Central Asia’s Koran schools, which dates from 1417. Stroll through the capmaker and spice bazaars and then meander past street-level mosques and madrasa. Enjoy a traditional Uzbek performance this evening along with dinner at a former madrassah. Overnight in Bukhara.

Late morning departure to continue with half a day of sightseeing in Bukhara. Admire the early 19th century Chor Minor Madrassah, whose four slender, blue-topped minarets give it its name. Next continue to Lyabi-Hauz Plaza, located in the heart of the old town. With the feel of a true oasis in an oasis town, the plaza is at the center of Bukhara’s old town and is – as it has been throughout history – a place to meet friends, to eat, to drink, and to relax in the shade. Free time at leisure. After late lunch, transfer to train station for our 2-hours' ride to Samarkand. Upon arrival transfer to our hotel. Overnight in Samarkand.

Today we venture outside of Samarkand and drive to Shakhrisabz, another UNESCO World Heritage Site. Here, the 14th century conqueror Timur, known in the west as Tamerlane, took forty years to construct his palace. The exquisite beauty of the enormous iwan, or monumental entryway, is all that remains of the once huge Ak Saray Palace, but still broadcasts the wealth and power of the ruler. Return to Samarkand in the afternoon and visit the sprawling Urgut Bazaar. Overnight in Samarkand.

Today will be spent exploring Samarkand, a UNESCO World Heritage city. Begin in the fabled Registan Square, dominated by three imposing monuments that are masterpieces of Islamic Architecture. The Ulug Beg Madrasa, built by the peaceful ruler for which it was named, was a famous theological school for the sons of wealthy families. Over the entrance way arch is a mosaic panel decorated with stylized geometric forms. The imposing entrance portal of the 17th century Shir Dor Madrasah depicts lion-like tigers pursuing gazelles below human-faced rising suns, a zoomorphic motif that mysteriously violates orthodox Islamic conventions. The Tilla Kari Madrasa and Mosque was conceived as the last, largest, and most embellished structure of Registan Square and encompasses extravagant gilt decoration in the mosque’s domed chamber. Located directly behind Shir Dar, Chorsu was the medieval commercial center. Nearby Gur-Emir Mausoleum was built for Tamerlane’s beloved grandson, Muhammad Sultan. When he died at an early age, Tamerlane ordered this mausoleum built for his burial. In 1405 Tamerlane died in a nearby city and his body was brought here since it was closer than his mausoleum at Shakhrisabz. Ulug Beg was Tamerlane’s grandson; he was an astronomer and a prince, the governor of Samarkand. This intellectual ruler created an amazing observatory in 1428 that housed the largest 90 degree quadrant the world had ever seen, and he constructed a three-story building to support and house it. His observatory influenced subsequent Islamic astronomy, and his star atlas, constructed from observations at Samarkand, was the first original astronomical publication since Ptolemy. It survives today as one of the great artifacts of astronomy and culture, not just of Central Asia but of the world. We will view this and the excellent onsite museum. We will board our train to Tashkent late afternoon.  Overnight in Tashkent.

Tashkent is often called the cultural capital of the Islamic world because of its many historic monuments. Our explorations begin in Independence Square, the largest city quadrangle in the former Soviet Union. Its most prominent feature is a globe with a map of Uzbekistan that replaces a 30-meter-tall statue of Lenin, a poetic expression of the birth of the nation. Next visit Navoi Theatre Square, where the opera house was built by the same architect who designed Lenin’s Tomb in Moscow. Then see the Crafts Center, where traders have plied their goods for centuries, and the Abdul Kassim Madrasa. Enter the Russian Orthodox Church that is over 135 years old, and the oldest in Central Asia. End today’s tour at one of the most remarkable medieval architectural monuments, the Barak Khan Madrasah, richly decorated with engravings, gilt, and glazed mosaic. Overnight in Tashkent.

This morning we leave Tashkent for Tajikistan and on to Khujand, the site of another Ancient Persian city, dating back about 2,500 years. It was conquered by the Arabs in the 8th century CE, and was besieged and then destroyed by the army of Genghis Khan in the 13th century. Located on the Great Silk Road, and connecting Samarkand with the Fergana Valley, Khujand enjoyed a favorable geopolitical location and significant transport importance. Here we will visit the Historical Museum of Sughd, next to a restored portion of the Khujand Fortress, and the Muslihiddin Medressa.  Overnight in Dushanbe.

Dushanbe, which means “Monday” in Tajik, developed on the site of a Monday marketplace village. Today it is a rapidly-developing metropolis.  Our tour of the city this morning includes the Tajikistan National Museum, the Museum of Ethnography, Shahmansoor Bazaar,and the Gurminj Musical Instrument Museum. In the afternoon, we travel outside the city to see Hissar Fortress, the remains of an 18th century fort occupied until 1924. Overnight in Dushanbe.

DAY 14: DEPARTURE from DUSHANBE (Tajikistan)  [B]

After breakfast hotel check-out by 11:00 am. End of our services. 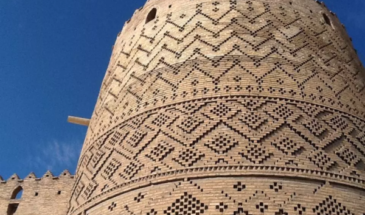 Visa Information for US citizens.