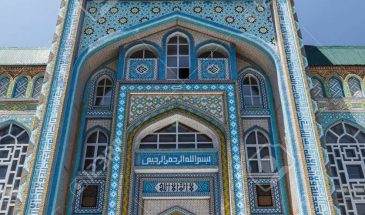 Few Central Asia tours offer the cultural flavour this journey through Tajikistan, Kazakhstan, and Kyrgyzstan does. Travel through the gorgeous landscapes of Tajikistan, stroll the colorful bazaars, and discover the unforgettable warmth of the people in these regions. Visit Central Asia and you'll wonder why you didn't get here sooner.

Arrive at Tashkent Airport. Our guide and driver will meet you and transfer to your hotel. Overnight in Tashkent.

This morning we leave Tashkent for Tajikistan and on to Khujand, the site of another Ancient Persian city, dating back about 2,500 years. It was conquered by the Arabs in the 8th century CE and was besieged and then destroyed by the army of Genghis Khan in the 13th century. Located on the Great Silk Road, and connecting Samarkand with the Fergana Valley, Khujand enjoyed a favorable geopolitical location and significant transport importance. Here we will visit the Historical Museum of Sughd, next to a restored portion of the Khujand Fortress, and the Muslihiddin Medressa. Overnight at Dushanbe.

Dushanbe, which means “Monday” in Tajik, developed on the site of a Monday marketplace village. Today it is a rapidly-developing metropolis.  Our tour of the city this morning includes the Tajikistan National Museum, the Museum of Ethnography, Shahmansoor Bazaar, and the Gurminj Musical Instrument Museum. In the afternoon, we travel outside the city to see Hissar Fortress, the remains of an 18th century fort occupied until 1924.  Overnight in Dushanbe.

Flight from Dushanbe to Almaty. Transfer to your hotel. Free day! Overnight in Almaty.

After breakfast, we depart from Almaty and drive to Bishkek via a newly built highway. In route watch the natural landscapes. Afternoon arrival in Bishkek then, check into the hotel. In the afternoon sightseeing of Bishkek: visit Central Museum, Independence Square, Philharmonic Square, University Boulevard, and TSUM. Overnight in Bishkek.

After breakfast, we drive to Karakol, a town situated in the east of the lake area, at the foot of the most picturesque mountains of Tian Shan. The way passes along the south shore of Issyk Kul. Follow the way along the shore of Issyk Kul until the town of Karakol. On the way stop in yurt maker’s village Kyzyl Tuu and visit yurt masters home. Visit Jeti-Oguz canyon on the way. Jeti-Oguz in Kyrgyz means “Seven Bulls”. This picturesque gorge is named so because of the red rocky sand formations covered with forests of Tien Shan Spruces. Overnight in Karakol.

After breakfast, you start city-tour in Karakol: visit the wooden Russian Orthodox Holy Trinity Cathedral. It was completed in 1895 and used as an officers’ club during Soviet Times; it is now restored and in use again as a church. There is also a small section of Russian Colonial ‘gingerbread’ style residential buildings. Also, you visit a wooden mosque, built entirely without nails by Chinese Artisans between 1907 and 1910 for the local Dungans (Muslims of Chinese origin who fled China during the aftermath of the XIX Century Hui Minorities’ War). Next, we visit is to the Museum of Nikolay M. Przhevalsky, the outstanding Russian Explorer of The Asian Continent. Drive to the city of Cholpon Ata, situated in the Northern shore of Issyk Kul Lake. Upon arrival to Cholpon Ata, visit a Petroglyphs site, the temple in the open air of Scythians and Hungsuns civilizations in VIII to IX Century B.C. until, III to IV Century A.D. Drive to Bishkek. Farewell dinner and overnight in Bishkek.

DAY 9: DEPARTURE from BISHKEK (Kyrgyzstan) [B]

After breakfast, hotel check-out by 11:00 am. End of our services.

Be the first to review “3 Stans: Tajikistan, Kazakhstan and Kyrgyzstan” Cancel reply

Visa Information for citizens of USA.